The LCA has already crossed the Rubicon 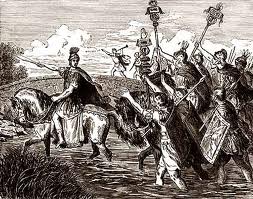 The Rubicon was crossed with women’s ordination in the LCA when General Synod approved the vote for women.

Voting is the symbol of a participatory democracy, where every voter exercises authority. When women vote at Synod on issues of theology and doctrine, they -in partnership with all other voters – are exercising authority over the Church.

Those who opposed the vote at the time did it exactly on the basis of arguments that said a woman should not exert authority over a man.

The Synod did not agree. And in giving women the vote have in effect declared that the pauline texts relating to women and authority are not to be taken as ones that are able to prevent women exercising authority in within the Lutheran Church today.

Posted by Katie and Martin on July 1, 2011 in history, politics, sociology, theology