What war on women? 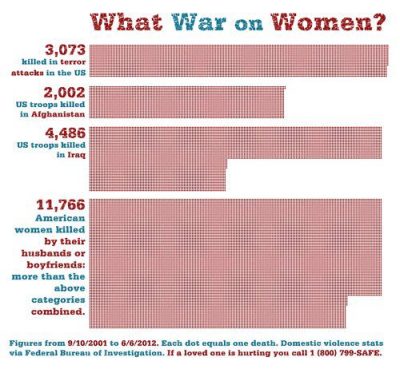 Putting the lie to equality

Those who stand against the equality of women within the Church use language such as this: (Cyber Brethren link)

God’s good order does not envision nor permit women to exercise the ministry of “headship” in the family, nor the ministry of oversight involved in the offices of the priesthood and episcopate as they are understood and practiced by Anglicans. This is in no way detrimental to women for God has an equally significant, different, and complementary ministry for women in the family and in the Church.

While there is no reason to doubt their intent, there is significant reason to doubt their logic.  While they propose that a ‘complementary ministry’ (a term commonly used in the US), is ‘equally significant and different’, and  ‘is in no way detrimental to women’, that view takes no account of the violence committed against women throughout broader society.  The graph above relates American statistics, demonstrating that female deaths from domestic violence far surpasses deaths from Afghanistan and Iraq.  Women are still treated violently in Western society, let alone Middle Eastern society.  The philosophical foundation of conservatism is the same in opposing women’s ordination and maintaining subservience in the home.

Why are such statistics instructive when discussing women’s ordination?  Opposition to women’s ordination does not arise simply from a literal reading of Scripture, it also arises from social mores and traditions that have long placed women somewhere down the social ladder.  It would be a challenging philosophical contortion to attempt to support equal opportunity in the work place while denying women ordination.

While conservatism may be a healthy anchor for the ship in a storm it has much to answer for in resisting justice issues throughout the ages.

Posted by Katie and Martin on May 27, 2013 in sociology, women's ordination

7 responses to “What war on women?”