The structures of hate 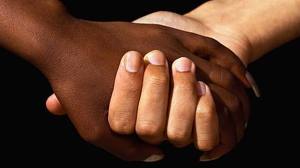 A Kentucky Baptist Church has voted to ban interracial couples becoming members of their congregation.  They can still attend church but can’t take any leadership, except for funerals. Read more.

The stated reason is that it is “intended to promote greater unity among the church body and the community we serve.”  Let’s build our unity while we exclude those we are uncomfortable with.  Let’s work with people just like us.  Let’s not face diversity.

Whatever the language, we’re a racist species.  We are clever in the way we justify our prejudice, our conservatism and our hate.   However, it’s racism and it’s obscene.

The LCA treats women in a similar manner.  ‘You can come to church but you can’t have leadership.  Anything else would detract from our unity.’  We create structures in our own image, rather than allow our gaze to fall on Jesus embracing despised prostitutes and criminals (and of course women).  Just as the U.S. south has not recovered from the racism of slavery, the LCA has not recovered from its isolated, antipodean, German misogyny, and it’s obscene.

Posted by Katie and Martin on December 3, 2011 in sociology