In response to Doug

Tanya Wittwer (fourth from the left)

Tanya Wittwer writes in reply to Doug, in the last post.

In a comment on a previous posting, Doug asked Karin, “Karen what do you mean God Him/Herself . Where do you get that idea from God is a she (sic). Yes you would like that wouldn’t you.”

None of the names and words we have for God can describe the totality of God, and perhaps none accurately describe any of the characteristics of God. The love of God is surely of a totally different dimension than love we can know as human beings.  The strength of God bears no relation to human strength. So all we have are metaphors.

Just a week or two back, the lectionary Gospel for the day included one of Jesus’ images for a searching God: the woman searching for the lost coin.  The church has had no difficulty in the images either side of this one (Luke 15:3-10 the caring shepherd, Luke 15:11-23 the waiting father), but the image of Luke 15:8-10 is rarely found in artwork, prayer or language for God.

The Hebrew Scripture reinforces the idea that God is beyond gender, with the words for the Holy Spirit (Ruach Hakodesh) and for God’s visible presence (Shekinah) being feminine terms. It is unfortunate that the English language does not make it easy for us to talk about God in language that avoids gendering.

One strong biblical feminine image is that of God the birthing creator.  In Isaiah 42:14, God says, “like a woman in childbirth, I cry out, I gasp and pant,” and in Deuteronomy 32:18b “You forgot the God who gave you birth.” Often feminine and masculine images of God are found side by side, as in Job 38:28,29. Other passages portray God as the mother feeding her young, caring for her young children, cleaning us, clothing us, wiping away our tears (Isaiah 66:13). Matthew and Luke report Jesus’ longing to gather God’s people, as a hen gathering her chickens under her wings.

The incarnation was into a male body. But Jesus’ gender does not limit the Word to male embodiment.  The Word became human to save all humanity, and call all humanity into the reality of God’s reign, where we are united as one in Christ regardless of gender (Galatians 3:28).

One of the difficulties of the church having used only male language for God is that it seems many forget that our words reflect only images of God, and instead fall into the idolatry of creating God in the image of man.  Male naming and identification becomes part of legitimating the oppression of women.  Scripture tells us that “God created the earth creature [adam] in God’s own image, in the image of God they were created: male and female God created them.” (Genesis 1:27 – my translation). An important aspect of my pastoral work is inviting women to know clearly that they, too, are created in God’s image.

Posted by Katie and Martin on September 23, 2013 in Hermeneutics, theology, women's ordination

Letter to the Bishop

Posted by Katie and Martin on August 6, 2013 in pastoral

The President has not passed away 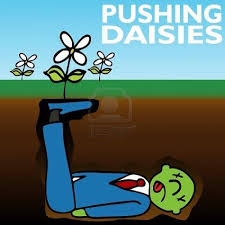 At synod the outgoing president advised delegates against saying that a person had passed away, when they had simply died. He decreed that nobody was to be heard saying of him that he had passed away after he died. This is the kind of clear lead the church is looking for from its president. Call a spade a spade, not a soil-turning device.

While we are at it, we need to get rid of all other euphemisms for death. Let a decree go out that there shall be an end to such expressions as: she’s cashed in her chips, he was called home, she bit the dust, he’s pushing up daisies, she has shuffled off this mortal coil, he has croaked, carked it or snuffed it, she has fallen off the perch, kicked the bucket, gone the way of all flesh, gone to a better place or been called to his/her eternal rest. We need to revert to saying what we mean and meaning what we say.

As for Ecclesiastes, what was the writer thinking when he/she spoke about the silver cord being snapped, the golden bowl being broken, the pitcher being shattered at the fountain, the wheel being broken at the cistern, the dust returning to the earth where it came from, and the spirit returning to God who gave it. Let’s excise Ecclesiastes 12:5-7 from the Bible, lest we be tempted to return to such round-about ways of speaking. Would anyone grieve their passing, if we pulled the plug on all circumlocutions for death? The president has spoken. Let’s do it.

Posted by Katie and Martin on April 30, 2013 in theology, women's ordination

Thanking God for the preaching of Nadia Bolz Weber

Hey, gentlemen Pastors, try to beat this sermon!  It’s from Nadia Bolz Weber from the ELCA.  It doesn’t come more gutsy than this.

Web page of Nadia Bolz Weber of the ELCA

Because these people of the Holy Week story are we people.  And we people are the likes of which God came to save.  God did not become human and dwell among us as Jesus to save only an improved, doesn’t make the wrong choices kind of people.  There is no improved version of humanity that could have done any differently. So go ahead. Don’t wait until you think your motivations are correct.  Don’t wait till you are sure you believe every single line of the Nicene creed (no one does).  Don’t worry about coming to church this week for the right reasons. Just wave branches. Shout praise for the wrong reason. Eat a meal. Have your feet washed. Grab at coins. Shout Crucify him. Walk away when the cock crows.  Because we, as we are and not as some improved version of ourselves…we are who God came to save. And nothing can stop what’s going to happen.

Posted by Katie and Martin on March 27, 2013 in sociology, theology, women's ordination

When people walk away from the Church

There is a time for some when they recognise their status as a spiritual refugee: a soul without a home, an IDP. They’ve been part of community for what may seem like a lifetime but it’s never felt like home.  Then they find they can’t remain.

How do you maintain self-esteem under such circumstances? They’ve tried the way of silence, the way of waiting to see if the unease settles. They’ve tried talking it out, to be reassured that they needn’t be concerned. However, the concern remains and grows.

There is a time for some when they find their feet and walk away from community, walk away from the pecking order, the silly stuff, the favourites, the boxes.

The sad thing is that few who remain do anything about what they see going on in the Church.

The following post on the nakedpastor’s blog recounts the sad journey of one walking away after alienation.  guest post: Syl’s story | nakedpastor.

Is this your experience of church?  What might be done, in your part of the world, when your mother Church tells you that you’re not good enough?

Posted by Katie and Martin on May 29, 2012 in politics, sociology, theology, women's ordination